Award winning Irish born jewellery designer Natasha Heaslip moved to London in 1994 to study jewellery. She completed an MA at London Guildhall University in 1998 and then set up her business at the well know Candid Arts Studios in Islington, where she established herself for over 10 years. She originally trained as a sculptor which has brought an interesting edge to her collections.

She has exhibited throughout the UK, Ireland, Europe and the Middle East receiving significant press, sales and commissions, including several pieces for the Royal family in Kuwait, where she was based for a couple of years before returning to Ireland.

She has featured on RTE’s Nationwide twice, Al Watynia breakfast live TV and The Arab times newspaper. Natasha’s work can also be seen in the film ‘Harry Potter and the Order of the Phoenix’; actor George Harris, who plays Kingsley Schacklebolt, dons a commissioned gold earring and a necklace.

Her design and skills have been rewarded through achievements such as being invited into the ‘Irish Fashion Innovation Awards’ 2016 and receiving the ‘New Product Design Award’ at Showcase Exhibition 2012, being a selected finalist in the RDS National Crafts Awards 2012. 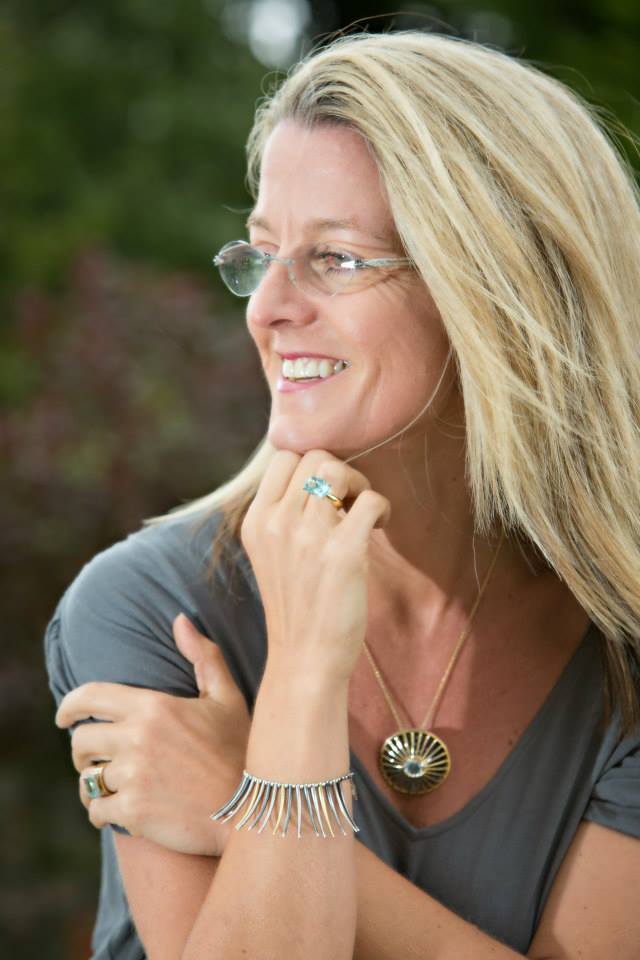 In 2006, she was awarded the ‘Silver Prize for Production Design’ at the Goldsmiths Company’s Craftsmanship and Design Awards. She was also amongst the eight finalists for the ‘Platinum Design Innovation Award’ in 2003, and has appeared as a guest speaker at seminars by The Crafts Council of Ireland in Dublin, Sonar in London, and the Cockpit Arts DPP course.

Natasha is also privileged to have been selected for the prestigious ‘Goldsmiths Fair’ for 6 years; she is one of the few chosen to show across the 2 weeks of the fair.

In her day of trade fairs, she supplied over 20 shops and galleries throughout the UK, Ireland, Norway and Europe, including The Billclliffe Gallery (Glasgow), and Primavera Gallery, Cambridge. She has also sold through ‘Selfridges’ Department Store, The Museum of London, and Design Yard (Dublin) and has regularly exhibited at the highly regarded Dazzle shows held annually in London, Edinburgh, and Manchester.

At the beginning of her career she also featured on the ITV programme, ‘Young, Gifted and Broke’ and received the Clerkenwell green award and was Prince’s Trust supported.

Natasha spent some time in Tanzania, where she trained Maasai women jewellery making and design skills. She also runs recycling workshops in under privileged schools, to make children aware of opportunities outside of their local environment. She has also taught adult classes in community colleges, as well as working with the ‘Crafted’ project in Ireland. 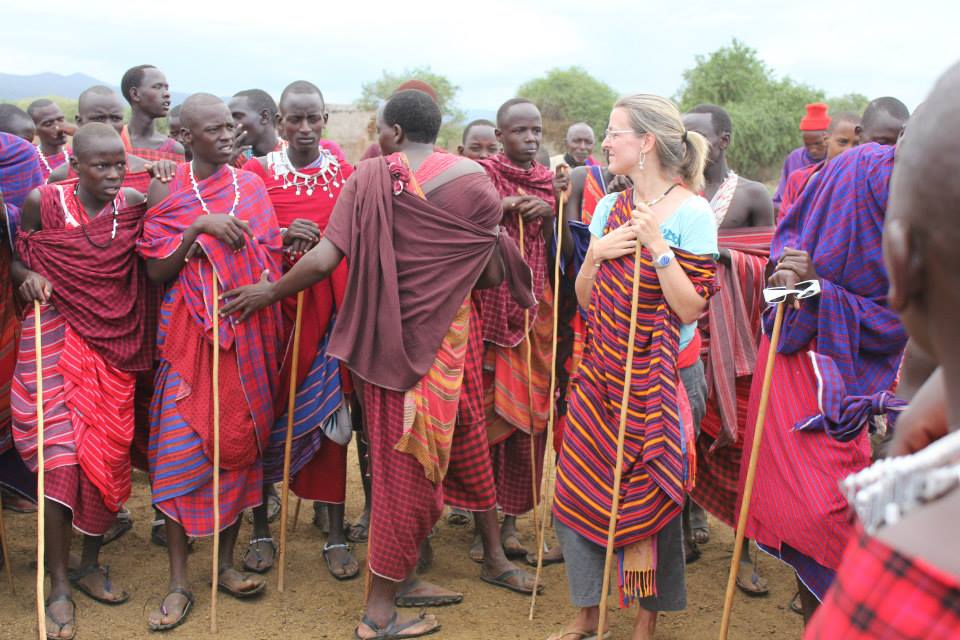 Now based in her home town of Galway, Natasha specialises in bespoke and one-off creations. She loves to meet with clients to create new ideas and bring their concepts to life. Anything is possible and she will work within your budget to create a unique piece of jewellery, within reach of your dreams. Consultations are free.

Jewellery As A Form Of Body Language

The approach I take when designing my work is influenced by my love of the connection between the spirit and the physical world. At the basis of my work is an exploration of how, when we don a piece, it affects us both emotionally and physically.

Originally, I trained as a contemporary sculptor.  I was fascinated in the art of subconscious expression through 3D objects and how a person would react upon their interaction with them and the space around them.

For my thesis, I researched tribal body adornment and their ceremonial objects. This greatly inspired me and I was fascinated to discover the deeper meaning and symbolism contained within their pieces.

For my Masters in Visual Culture & Applied Art, I explored the idea of jewellery being a form of body language and expression. See sculputural jewellery. Over the years, this has resulted in a refining of this idea and pushing the theory and practice in different directions. 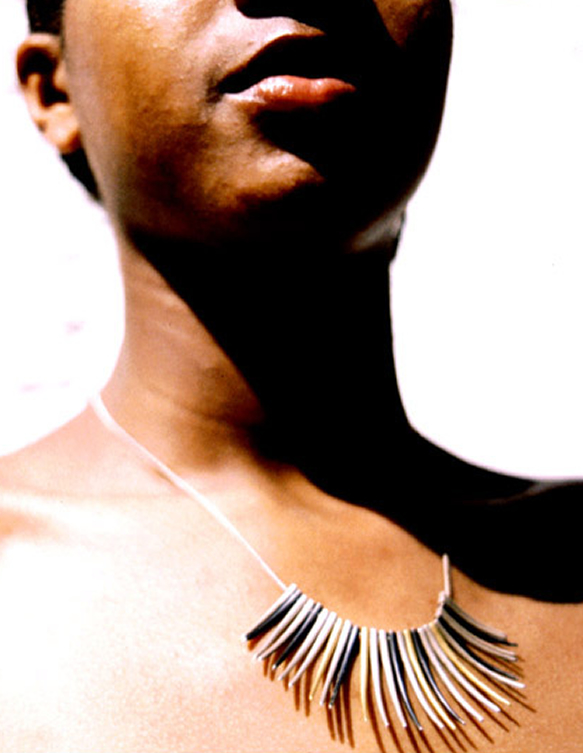 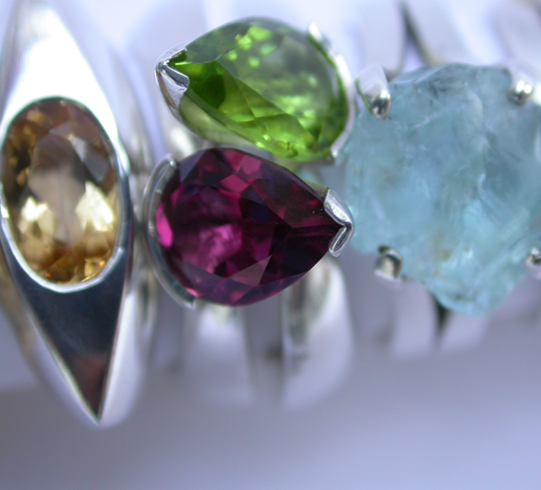 The Spirit Of Gemstones

Having also studied Crystal Healing, Reiki and Shamanism, I often explore the energy and spirit of each gemstone within my designs and the role that they play in the relationship between the body and the Souls essence. For example, the possible influence they can have, in terms of the healing properties each gem and metal holds. I love to see what resonates with a person, when they hold a stone, or a piece of jewellery, aware or unaware of its energies, it always surprises me and brings great joy.

Also my passion for gemmology has inspired me to create innovative settings, in order to see the true beauty of each stone, which in turn has influenced a continuation of simplicity throughout my designs. One can often feel tempted to over embellish but the success of the piece lies in achieving balance. The flow of a line must be just right. If it is off by even a fraction the piece will lose its beauty and energy. See more on healing properties of Gems.

This website uses cookies to improve your experience while you navigate through the website. Out of these, the cookies that are categorized as necessary are stored on your browser as they are essential for the working of basic functionalities of the website. We also use third-party cookies that help us analyze and understand how you use this website. These cookies will be stored in your browser only with your consent. You also have the option to opt-out of these cookies. But opting out of some of these cookies may affect your browsing experience.
Necessary Always Enabled
Necessary cookies are absolutely essential for the website to function properly. These cookies ensure basic functionalities and security features of the website, anonymously.
Functional
Functional cookies help to perform certain functionalities like sharing the content of the website on social media platforms, collect feedbacks, and other third-party features.
Performance
Performance cookies are used to understand and analyze the key performance indexes of the website which helps in delivering a better user experience for the visitors.
Analytics
Analytical cookies are used to understand how visitors interact with the website. These cookies help provide information on metrics the number of visitors, bounce rate, traffic source, etc.
Advertisement
Advertisement cookies are used to provide visitors with relevant ads and marketing campaigns. These cookies track visitors across websites and collect information to provide customized ads.
Others
Other uncategorized cookies are those that are being analyzed and have not been classified into a category as yet.
SAVE & ACCEPT